In this tutorial, we will create a multi-room chat server using Laravel framework and Centrifugo real-time messaging server.

Authenticated users of our chat app will be able to create new chat rooms, join existing rooms and instantly communicate inside rooms with the help of Centrifugo WebSocket real-time transport.

This tutorial was written for Centrifugo v3. We recently released Centrifugo v4 which makes some parts of this tutorial obsolete. The core concepts are similar though – so this can still be used as a Centrifugo learning step.

For the backend, we are using Laravel (version 8.65) as one of the most popular PHP frameworks. Centrifugo v3 will accept WebSocket client connections. And we will implement an integration layer between Laravel and Centrifugo.

For CSS styles we are using recently released Bootstrap 5. Also, some vanilla JS instead of frameworks like React/Vue/whatever to make frontend Javascript code simple – so most developers out there could understand the mechanics.

We are also using a bit old-fashioned server rendering here where server renders templates for different room routes (URLs) – i.e. our app is not a SPA app – mostly for the same reasons: to keep example short and let reader focus on Centrifugo and Laravel integration parts.

To generate fake user avatars we are requesting images from https://robohash.org/ which can generate unique robot puctures based on some input string (username in our case). Robots like to chat with each other!

We also have some ideas on further possible app improvements at the end of this post.

Why integrate Laravel with Centrifugo?​

Why would Laravel developers want to integrate a project with Centrifugo for real-time messaging functionality? That's a good question. There are several points which could be a good motivation:

Hope this makes sense as a good motivation to give Centrifugo a try in your Laravel project. Let's get started!

Setup and start a project​

For the convenience of working with the example, we wrapped the end result into docker compose.

To start the app clone examples repo, cd into v3/php_laravel_chat_tutorial directory and run:

At the first launch, the necessary images will be downloaded (will take some time and network bytes). When the main service is started, you should see something like this in container logs:

Then go to http://localhost/ – you should see: 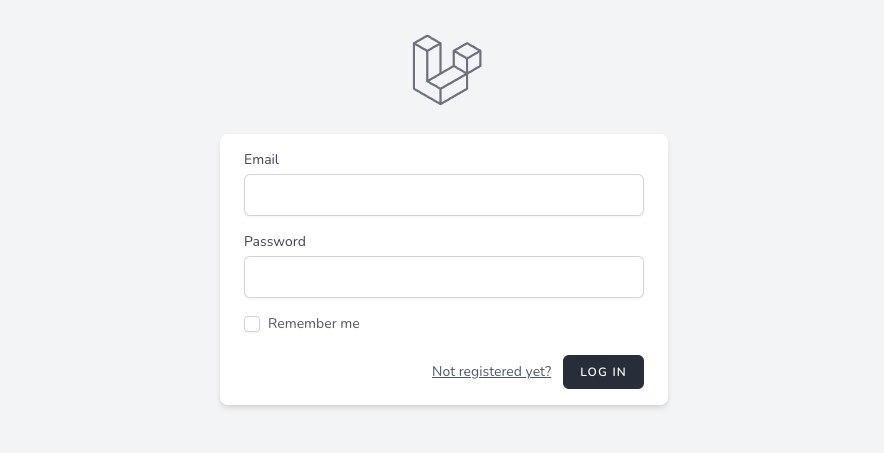 Register (using some fake credentials) or sign up – and proceed to the chat rooms.

Pay attention to the configuration of Centrifugo and Nginx. Also, on entrypoint which does some things:

We assume you already familar with Laravel concepts, so we will just point you to some core aspects of the Laravel application structure and will pay more attention to Centrifugo integration parts.

After the first launch of the application, all settings will be copied from the file .env.example to .env. Next, we will take a closer look at some settings.

You can view the database structure here.

We will use the following tables which will be then translated to the application models:

For broadcasting we are using laravel-centrifugo library. It helps to simplify interaction between Laravel and Centrifugo by providing some convenient wrappers.

Step-by-step configuration can be viewed in the readme file of this library.

Pay attention to the CENTRIFUGO_API_KEY setting. It is used to send API requests from Laravel to Centrifugo and must match in .env and centrifugo.json files. And we also telling laravel-centrifugo the URL of Centrifugo. That's all we need to configure for this example app.

As an alternative to laravel-centrifugo, you can use phpcent – it's an official generic API client which allows publishing to Centrifugo HTTP API. But it does know nothing about Laravel broadcasting specifics.

When user opens a chat app it connects to Centrifugo over WebSocket transport.

Let's take a closer look at Centrifugo server configuration file we use for this example app:

This configuration defines a connect proxy endpoint which is targeting Nginx and then proxied to Laravel. Centrifugo will proxy Cookie header of WebSocket HTTP Upgrade requests to Laravel – this allows using native Laravel authentication.

We also defined a "personal" namespace – we will subscribe each user to a personal channel in this namespace inside connect proxy handler. Using namespaces for different real-time features is one of Centrifugo best-practices.

To use native Laravel user authentication middlewares, we will use Centrifugo proxy feature.

When user connects to Centrifugo it's connection attempt will be transformed into HTTP request from Centrifugo to Laravel and will hit the connect proxy controller:

This controller protected by auth middleware.

Since Centrifugo proxies Cookie header of initial WebSocket HTTP Upgrade request Laravel auth layer will work just fine. So in a controller you already has access to the current authenticated user.

Note, that in our chat app we are using a single personal channel for each user to receive real-time updates from all rooms. We are not creating separate subscriptions for each room user joined too. This will allow us to scale more easily in the future, and basically the only viable solution in case of room list pagination in chat application like this. It does not mean you can not combine personal user channels and separate room channels for different tasks though.

Some additional tips can be found in Centrifugo FAQ.

In RoomController we perform various actions with rooms:

When we publish a message in a room, we send a message to the personal channel of all users joined to the room using the broadcast method of Centrifugo API. It allows publishing the same message into many channels.

We also add some fields to the published message which will be used when dynamically displaying a message coming from a WebSocket connection (see Client side below).

Our chat is basically a one page with some variations dependng on the current route. So we use a single view for the entire chat app.

On the page we have a form for creating rooms. The user who created the room automatically joins it upon creation. Other users need to join manually (using join button in the room).

When sending a message (using the chat room message input), we make an AJAX request that hits RoomController shown above. A message saved into the database and then broadcasted to all users who joined this room. Here is a code that processes sending on ENTER:

After the message is processed on the server and broadcasted to Centrifugo it instantly comes to client-side. To receive the message we are connecting to Centrifugo WebSocket endpoint and wait for a message in the publish event handler:

We are using centrifuge-js client connector library to communicate with Centrifugo. This client abstracts away bidirectional asynchronous protocol complexity for us providing a simple way to listen connect, disconnect events and communicate with a server in various ways.

In publish event handler we check whether the message belongs to the room the user is currently in. If yes, then we add it to the message history of the room. We also add this message to the room in the list on the left as the last chat message in room. If necessary, we crop the text for normal display.

In our example we only subscribe each user to a single channel, but user can be subscribed to several server-side channels. To distinguish between them use ctx.channel inside publish event handler.

And that's it! We went through all the main parts of the integration.

As promised, here is a list with several possible app improvements:

We built a chat app with Laravel and Centrifugo. While there is still an area for improvements, this example is not really the basic. It's already valuable in the current form and may be transformed into part of your production system with minimal tweaks.

Hope you enjoyed this tutorial. If you have any questions after reading – join our community channels. We touched only part of Centrifugo concepts here – take a look at detailed Centrifugo docs nearby. And let the Centrifugal force be with you!